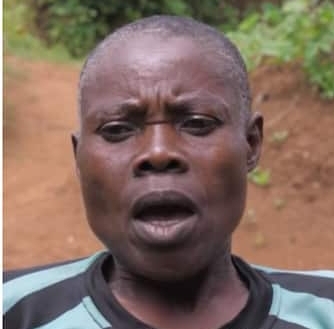 Alvera Uwitonze, is a 56-year-old Virgin who is now desperately searching for a husband.

Alvera said she’s tired of being lonely and she regrets rejecting suitors when she was younger.

Speaking on the reason she rejected the men who came to ask for her hand in marriage, she said it was because she feared that one of them would impregnate her and then abandon her.

Later, she found a man who said he was interested in marrying her but the condition he gave didn’t allow the marriage to work.

The man asked her to pay him N80k and she couldn’t do that.

Alvera also suffers from a condition caused by the ignorance of her parents at a young age. When she was young, she fell ill and instead of being taken to the hospital, her parents took her to a witch doctor for treatment.

The treatment caused her to become bent, unable to stand straight anymore. Now she lives alone without anyone to help her out. She’s really hoping she’ll find a husband soon.