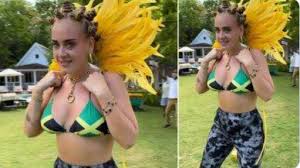 15 times Grammy award winner Adele, who is usually reserved and shy with what we hear and see of her in public, has set the internet ablaze as she rocks a bikini top in a picture posted on her Instagram page.

While this might seem like its not worth the amount if attention it’s attracted, fans and followers of the singer, know that she almost never does anything like this, infact this simple act which wouldn’t even get a second glance had it been any other female musician, has her fans wondering what has changed about her.

In the picture, Adele is shown with her hair in bantu knots and a Jamaican flag bikini top. The picture caption read  “Happy what would be Notting Hill Carnival my beloved London.” Her post was followed by emoji flags of Britain and Jamaica.

The Notting Hill Carnival is a significant event in Black British culture that began back in 1966, it takes place on the Sunday and Monday of the country’s August Bank Holiday weekend. It was however cancelled this year due to the CoronaVirus, forcing people to observe the carnival virtually or in other ways.

However, if this post was an attempt by the singer to show support for the Black culture, it did not quite go as planned, as some people had negative reactions to the post, saying that was not what the Black community needed at the moment.

Fredrick Joseph, author of ‘The black friend’ made a post on his Instagram page with caption “Black people have been through enough in 2020” and then inserted the Adele photo underneath. Another popular author Erbest Owens, said in a tweet that the photo was an attempt at cultural appropriation, that nobody asked for, he went further to say “this marks all top white women in pop as problematic.”