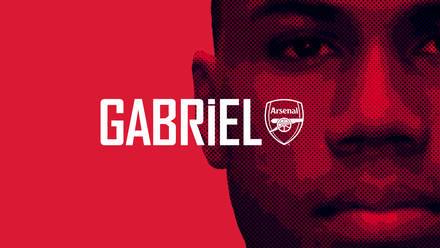 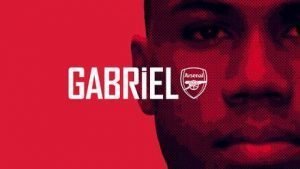 The 22 year old defender joined the English club from Lille on a ‘long term contract’ which cost the FA cup champions 27 million pounds.

Speaking on the new signee, Arsenal boss Mikel Arteta said “We welcome Gabriel to Arsenal. He has many qualities which will make us stronger as a defensive unit and as a team. He has proved with Lille that he is a defender with many outstanding attributes and we are looking forward to watching him grow as an Arsenal player.”

The club’s  Technical director Edu also said: “We are delighted to have signed Gabriel. He is a player we have been studying for a while and he was in demand from many clubs, so we are proud to have agreed and completed this transfer with Lille and the player. Gabriel is a player of high quality and Mikel and his coaches are looking forward to integrating him into the club.”

Gabriel joins the north London club as manager Mikel Arteta – who defeated Liverpool last week to win the Community Shield-  looks to shore up his defence ahead of the new campaign with center back William Saliba, who was signed last year and loaned back to St Etienne, also set to make his debut this season.

Don Jazzy Mourns The Eviction Of His Favorite BBN Housemate