Arsenal Has Won Another Community Shield 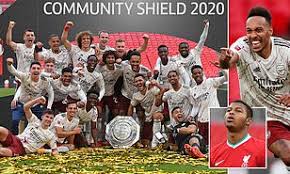 The Gunner’s captain Aubameyang, put them ahead with a nicely struck curling shot in the 12th minute, and then paid homage to deceased hollywood actor Chadwick Boseman, with his ‘wakanda forever’ celebration.

The gunners however failed to increase thier lead, and finally lost it in the 73rd minute, as Liverpool’s Takumi scored an eqaulizer, which leveled the game until the final whistle was blown.

However, unfortunately for the Premier League Champions, Arsenal came out victorious in the penalty shoot out, as Liverpool’s Rhian Webster hit the crossbar, condemning the Reds to thier second consecutive Community shield loss in a penalty shootout.