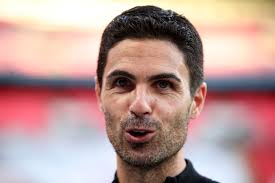 Messi has requested a release clause activation at Barcelona, and reports say Man City are the most likely club to sign the Argentine center forward, due to the players pre-existing relationship with City boss Pep Guardiola.

However, Arteta says the possibility of Messi playing in the EPL doesn’t bother him, instead, it excites him, as he thinks having a player like Messi in the league would make the competition more intense.

in his own words, “If Messi comes to England we’re all going to enjoy it, I have been a Barcelona fan since I was a young boy and it’s sad to see the best player in football history leaving that club. He has been linked with more clubs than any other player in the world but even if he comes to one of our Premier League rivals it will be good for football.”

Barcelona haven’t announced if they would allow Messi leave Camp Nou this summer, but the player seems determined to leave especially after Bayern’s Humiliating defeat in the Champions League quarter finals.

Messi Struggles to Leave Barcelona By Any Means, As City Watches With Interest