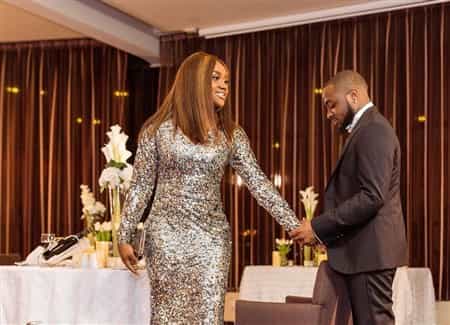 The two love birds have now officially become Fiancee(s) just as Davido assured some time ago in an emotional song.


The Assurance crooner has now decide to tie-the-knot with the woman in his heart, Chioma was seen with Baby bumps and people started thinking she will soon join the league of millions Baby Mama(s), but her case is far from that, as she has now engaged to millionaire son, and Billionaire Nigerian musician.

30 Million Gang, will soon be having a mom and a child is coming along with the precious jewel, a lot of actions were spotted on the Media prior to this engagement that we see coming.

@Tolutezzy “I thought it was suppose to be propose before introduction” yes you’re right but when you have money like Davido you can do wedding, follow by introduction and then propose as long as both Chioma and Davido love themselves we move.”
@A_Nimiyoe_ “Chioma said yes to Davido this ain’t Ghetto love its called Urban love.”
@Chinnybaby “Lol if you think Davido only married Chioma to save face because of pregnancy explain the other ring less baby mama’s ? Please shift assurance 2020 was gonna happen regardless.”
@Auntyamara “Na wa oooo some of you acting like Davido only proposed because Chioma was pregnant, don’t forget your dad didn’t even propose to your mom. Allow them please.”
@Tundacris “friend of mine said he’s really happy for Davido that Chioma said Yes to him.


I was like “were you guys expecting her to say No to him? How is she not going say a Yes in a 30billion times.”
@Lovee_nessa “Can’t be happy for people and move along. Davido always wanted to marry Chioma pregnant or not. You all just mad because you were wrong with your prediction that they’ll break up. Hopeless idiots.”
@Iam_yhemie “Davido did introduction before proposing. I stan.”
@Ezrael_ani “Was Davido thinking Chioma will say no to his proposal ? Lmao, David doesn’t really know who Davido is oh.”
@Iamtessyyo “Chioma is pregnant. Thank God she got the ring because her enemies really wanted her as a baby mama.”
@Badman_skylar “Everybody are shouting Chioma said yes ,acting surprised. Which Igbo girl can say no to a rich man ? Which?

Big Brother Naija: Kiddwaya Reveals His Intentions For Erica And Nengi As He Exists…

Read What This South African Lady Said To Justify Her…

BB Naija: My Family Will Say I Came To Big Brother House To…