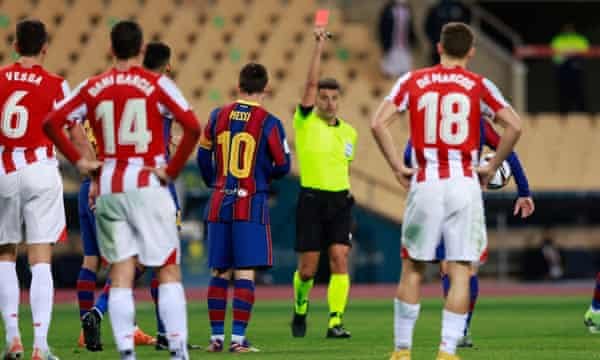 Barcelona’s MVP Lionel Messi, has been issued his first red card(in club football) since his debut for the Spanish football giant.

Messi was sent off in the final moments of  the Spanish SuperCup final, after VAR revealed that he took a violent swing at Athletic Bilbao’s Asier Villabre. The six time Ballon d’Or winner, who has never been sent off during a game for his club, has now been issued a 2 game suspension.

However, Barcelona have stated that they would be appealing against the suspension, which was issued by the Spanish Football Federation (RFEF).

Should their appeal fail to be accepted,  Messi would miss Thursday’s Copa del Rey last-32 tie at Cornella, and Barça’s La Liga away fixture against Elche.

Messi’s latest red card means he has now  been sent off a total of “3” times. The first 2 times happened on International duty for Argentina (on his international debut against Hungary in 2005 and in the 2019 Copa America third-place play-off against Chile), with the final red card now coming while representing Barcelona against Athletic Bilbao.