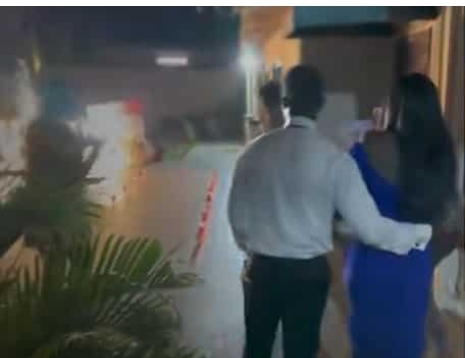 A young man had planned an epic surprise proposal for his girlfriend, but things took a turn for the unexpected when a lady, who was capturing the moment, interrupted the proposal with a unexpected action.

The incident occurred when the lady, who was in charge of filming the proposal, unknowingly stepped backwards and landed in the pool.

The couple, along with everyone present, screamed with fear as they turned to check if she was okay. The video of the incident, which was shared on TikTok, shows the lady capturing the proposal with rapt attention, not realizing that there was a pool behind her.

At one point in the video, she moves some steps backwards and immediately falls into the pool. The incident caused a scene at the proposal venue and left the couple in shock.

Despite the unfortunate incident, the couple was able to laugh it off and the proposal went on as planned. The couple later shared the video on TikTok, where it went viral and received a lot of views and comments.