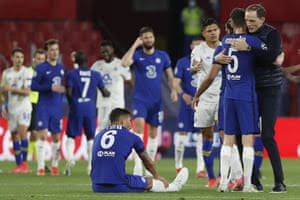 Thomas Tuchel’s Chelsea has managed to scale through to the Champions League Semi-final stage, despite losing the second leg of their clash against Porto. spectacular late overhead kick from Mehdi Taremi to overcome Porto and confirm a place in the Champions League semi-finals for the first time in seven years.

The blues were able to gain a 2 goal lead over Porto in the first leg, and despite some late attempts to shake that lead, FC Porto failed to do so, as they lost 2-1 on aggregate to Chelsea.

While they were subpar for most of the match and barely threatened Chelsea’s goalkeeper, FC Porto seemed to suddenly come to life in the closing moments of the match, when Mehdi Taremi scored a stunning goal with an overhead kick. However, it was all too late, and their efforts only produced that consolatory goal.

With their victory over their Portugese opposition, the blues would now go on to face either Liverpool or spanish side Real Madrid in the Semi-finals.