Cristiano Ronaldo has been awarded Legend by Marca in Spain 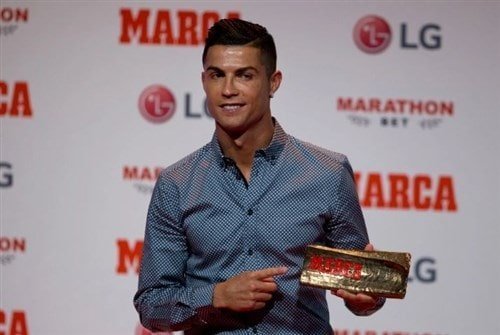 The Media Company has handed the award to stars such as Muhammed Ali, Usain Bolt, Michael Jordan, Pele, Diego Maradona and Lionel Messi in the past and they had selected the Skills Guru Cristiano Ronaldo for this years edition.

The Portuguese skipper spent a decade (9-10 years) at Real Madrid, and has won four (4) of his five (5) Ballon d’Or and four Champions Leagues titles, as well as two (2) La Liga crowns and two (2) Copa del Rey trophies, scoring a whopping 450 all round goals in just 438 games for the club.
Article Continues Below;
EDITORS PICKS:


He has also stayed five (5) years at his childhood club Sporting CP but just a year at the senior team and moved to Manchester United in 2003 only to left for Real Madrid in 2009, the superstar then stayed at the Spanish capital for about 9-10 years, almost a decade before choosing to embrace another challenge at turin in italy.

The Juventus star believes he is one day returning to Real Madrid after his 99 million euros move to Juventus, he gives out the hint in an interview by children during the Marca award.

The Bianconeri superstar stated “This is one of the most beautiful cities in the world.

“I travel a lot, but I haven’t seen many cities like Madrid. I hope to return to Madrid as soon as possible because this is a city I love.”
He continued “I miss both of them (Manchester United and Real Madrid), but I spent more time at Real Madrid and my family grew up here so I miss Real Madrid more.

“It wasn’t easy to leave Real Madrid after nine years.“ 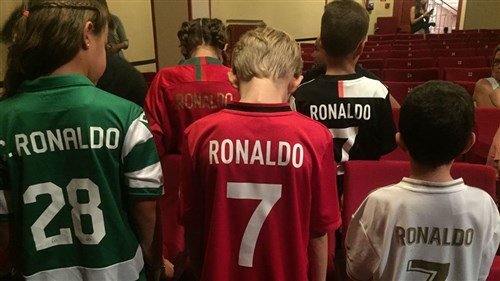 The Portuguese experienced a peculiar moment at the 2019 MARCA Legend gala as he was interviewed by five (5) children, all were wearing one of the shirts he did played in during his career.
The former Manchester United and Real Madrid goal scoring machine seemed a little nervous at first, but just as always, he keeps his calm and was very friendly with the children and answered their questions one by one with a cute smile appearing on his face.

The Legend says “The press is easy to manage, but children……” He joked before the questions session started.

The First to come up was Claudia, who came out in his first ever professional jersey a Sporting CP shirt with ‘Cristiano Ronaldo 28′ stamped on the back of it.


Cristiano Ronaldo Responded “No, I never thought about it,”. “My dream was always to be a professional footballer.” 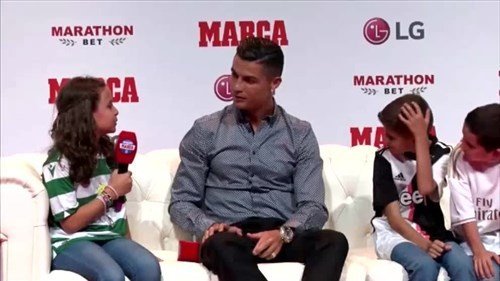 Next in line was Gonzalo, who wore a Manchester United shirt with a “Ronaldo 7” inscribed.
“Do you miss Manchester or Madrid more?” he asked.
“I miss both of them, but more of my life changing events came in Madrid; my children were born [here] and [I met] my girl, so I miss Madrid more,” The Portuguese answered.

The third to ask was Iciar, who come along with a Portugal jersey neatly inscribed his famous No.7 on the back.


He asked “Is the European Championship the best triumph of your career? The trophy you’re most proud of?”.

Ronaldo take a deep breath and answered “All trophies are important, but it possibly is because it is special,” said Ronaldo . “It’s not the same (as the others) when you win something for your country and you know it is very difficult [to do]… it’s the most important thing in my career.”

Next was Jorge;
The little fella donned with a Real Madrid shirt with ‘Ronaldo 7‘ on the back.


The kid didn’t waste time as he says “It made me sad that you left
Real Madrid,”
“Me too,” Cristiano Ronaldo responded as he laughed and touched Jorge’s hand.

The last question came from Marco, who was in his current Juventus shirt with ‘Ronaldo 7‘  stamped clearly at the back.
“Will you win the Champions League this year?” he asked.
“I don’t know,” the Portuguese replied . “We’ll try, like always. Hopefully
Juventus wins.”

The Juventus front-man was there with her fiancee Georgina Rodriguez as they were pictured during the award ceremony.

Real Madrid will be happy for this reply from Ronaldo but I must admit, if they weren’t bunch of ash*les they won’t have let a star like Ronaldo go just like that.

If you’re a true CR7 Fan lets hear from you.

You can also keep up Cristiano Ronaldo>} CLICK HERE