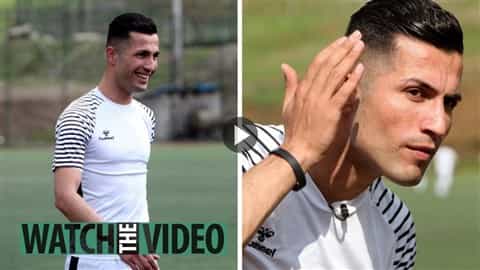 A Former construction worker who is currently based in England, Biwar Abdullah has gotten a super resemblance of Former Manchester United and Real Madrid forward Cristiano Ronaldo.

They have been a few people that got the looks of the Portuguese legend but this man has bitten more than he can chew, the striking resemblance from him start from the eyeballs down to cheeks and a super nose of Ronaldo.

The Iraq born superfan of Cristiano ronaldo, who came to England for a much better life and to continue his hustling, was spotted by a shop owner, Shane Douglas 35, who noticed that  he very much looked like the five-time Ballon D’Or winner Cristiano Ronaldo.

The pair start up a friendship right from the moment and Shane plans to represent Biwar and turn him into a full-time Ronaldo lookalike in the future, appearing at parties and events when called upon.

Shane said: “He was walking past my shop in a Juventus shirt and he caught my eye, I thought it was Ronaldo at first and then I ran out.

“At the time, I had a copy of Fifa 19 in my hand, which has Ronaldo as the cover star – I looked at it and compared it with Biwar, I couldn’t believe the resemblance.

“I stopped him and said he looks exactly like him and that with the right help and contacts there could be future in this for him, I just can’t believe no one has thought to help him before.

“He told me people have already noticed him walking around town and he gets shouts of Ronaldo wherever he goes.

“It helps that he is such a fan and loves football, so when people see him – he’s often in his favourite Juventus shirt which makes him look even more like his idol.”

Biwar, who lives in Derby, has followed the Portuguese star since he began his career at Sporting Lisbon as a teenager.