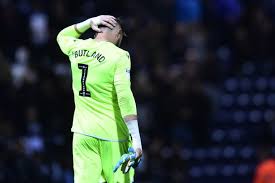 Crystal Palace has been dealt an unkind blow by lady luck, as their new goalkeeper JackButland, has tested positive for Covid-19 and is now in self isolation.

Jack’s infection comes at a horrible time, as the Eagles are set to travel to Craven Cottage where they face Fulham in a premier League fixture tomorrow.

Palace boss Roy Hodgson, confirmed the bad news to fans of the club saying “It’s very unfortunate with Wayne Hennessey picking up such a serious injury in the last international break.”

“It  was extremely unkind to us, I have to say. So we were forced to act because we know he will be out until January. We don’t know then what the future will hold for him. We needed to bring someone in.”

“Our misfortune continued because no sooner had Jack come and signed than he tested positive for coronavirus. So we haven’t seen him because he has to self isolate.

“Like Jordan [Ayew], he is stuck in a hotel room in London, a very boring existence, I can only imagine, waiting for the magical period of time you have to self isolate for to pass to take another test, hopefully he will be clear.”

“The good news is that he is feeling very good, very frustrated, and very disappointed that all he is see’s is four walls and nothing else at the moment.”

Jack Butland who Crystal Palace signed for £500,000 to stand in for their injured number 1, is now self isolating in a London hotel room for the next 10 days, leaving Palace in a tight corner when they face Fulham tomorrow.

EndSARS: If People Died During The Lekki Toll Assault Let Their People Speak Out – Actress Omotola