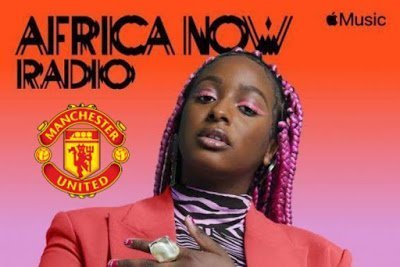 
The Billionaire’s daughter was left fuming a week ago, after her former club, Arsenal, got a second straight loss to Brighton.


The struggling gunners were still the losers against Brighton last week, after initially losing 3-0 to Manchester City a week before.

This left a heartbroken Cuppy with no option but to break-up with the gunners after 6 full years of supporting the club, although we wouldn’t know if the 6 years relationship was enriched with happiness and passion, but all we know is that the last few weeks has been hell for the Gelato crooner, it also looks like the Nigerian Deejay was suffering all along.


“It’s not me, it’s you. Only so much heartbreak a girl can take @Arsenal… I can no longer stay in this toxic relationship. I’m sorry.” 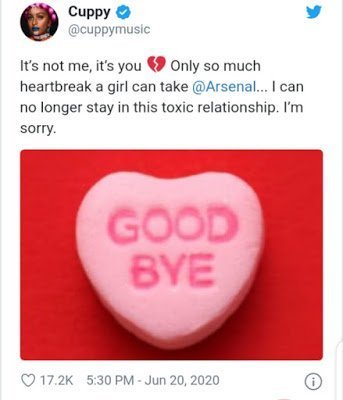 A toxic relationship! she was suffering all along, the guns were getting out of fashion and the whole Arsenal was not having a good weapon for a very long time, but she was hoping that maybe, just maybe one day, things will get better.


But she has been waiting like forever, the wait was making her sick, she was tired of heartbreaks and pain.


She could not hold it back anymore. 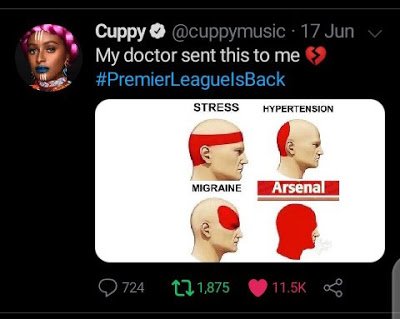 That was a tweet from her about the stress limit the gunners has incurred on her. 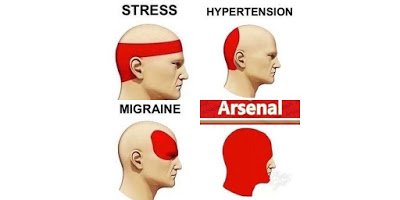 She finally gave up, who wouldn’t, after a full month of Covid 19 pandemic and the lockdown, the sport was back and every fan out there was eager to get back to their passion, their joy and happiness, and then there is you, who is back to collect a more stronger pain, a pain of a broken fan who has waited for so long to see his team in action yet again, a fan who has hoped of a different feeling to cool off the lockdown effect.


But Arsenal failed her, they fail not only once but twice.


She wrote them a break up letter, she can’t stand the pain anymore, the heartbreaks were too much for a girl and she ended it.

After the break up, Cuppy informs her Twitter followers that she is looking for a new club, not another heartbreaker, but a club that can finally heal her wound. 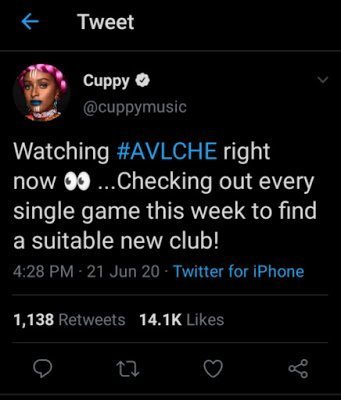 She later shared her excitement when the blues won, but her promise was to watch all the remaining matches to Choose what she likes.


About to watch #TOTWHU 👀 …Hopefully Kane touches the ball today! 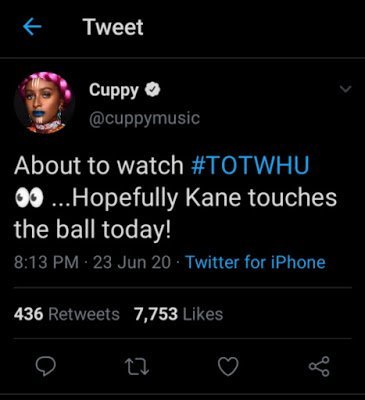 Nothing good came out of this one though.

Going to watch #MUNSHU👀 … Still checking out every single game this week to find a suitable new club! 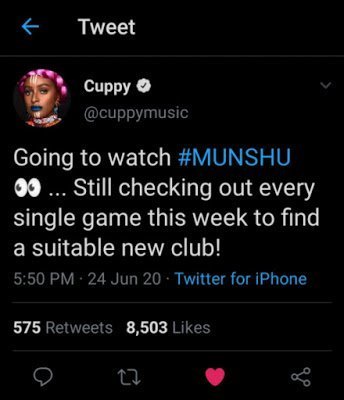 This time around, French International, Anthony Martial takes all the pleasure to show Cuppy what she was definitely missing, he scored his first senior hat-trick on the night and the reds won 3-0 with a clean sheet.


Although DJ Cuppy appreciated what she saw.


But that was not enough to convince her, she went mute until another chance Pop up.


Manchester United got another chance yesterday to finally win the Green light crooner, the reds took on Norwich in the Emirates FA Cup and this time, Nigerian international, Odion Ighalo was there on the starting line up.


Which brought out more excitement from his Nigerian sister.


Cuppy yesterday tweeted before the match. 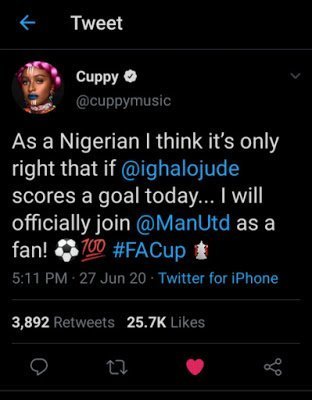 As a Nigerian I think it’s only right that if @ighalojude scores a goal today… I will officially join @ManUtd as a fan! ⚽️💯 #FACup

Blood was involved this time, a fellow Nigerian was given the task to get the girl.


And there he was, Ighalo Jude volleyed home the opener in the opening minutes of the second half and his goal, later on, gave United a place in the semi-finals, also recruit a fangirl for to the red fanbase.


It was the Billionaire’s daughter DJ Cuppy


She tweeted shortly after the match, a red 🔴 circle that can only begotten from the red devils. 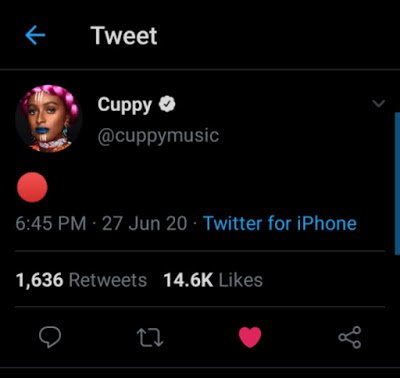 All the Screenshots are taken from my phone: you can see my biased self hitting the love emoji whenever she talks about the reds 💯

She is a fangirl already, if you’re another lucky lad that was waiting for her to join, then smile. 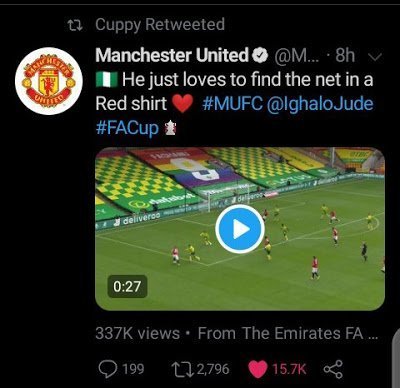 She retweeted the goal from the official Manchester United account. 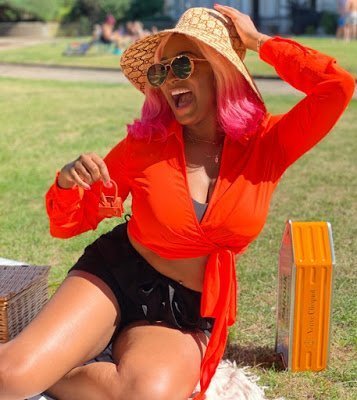 She is now officially red.


I’m personally happy about our new addition because I’m 💯 RED!😍 And it’s my pleasure to welcome you to the Red Devil’s Fanbase, I did my best on Twitter and I’m glad my lucks won us another beautiful fangirl, I wish you saw this someday.


Are you a Manchester United fan?