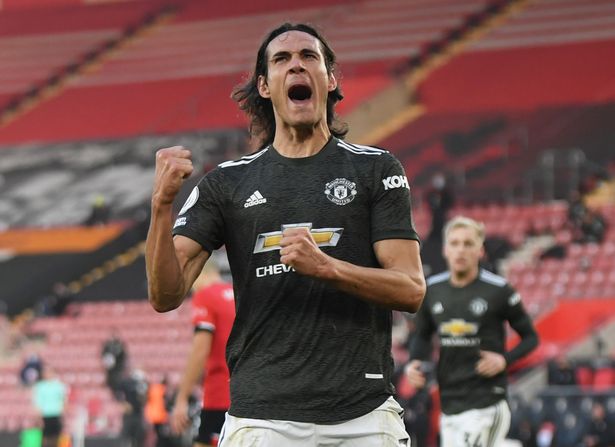 Edinson Cavani is the man of the moment at Manchester tonight, as he came on as a 2nd half substitute and infected his teammates with a victorious spark that helped United come up from behind and defeat Southampton 3-2.

Cavani came on in the second half of the game to replace Mason Greenwood,  and by the 59th minute of the game, he had already assisted Bruno Fernandes to score a goal which seemed to resuscitate United’s squad that had been 2 goals underneath Southampton.

Edinson Cavani then added his personal contributions, as he scored 2 headed goals, the 1st in the 74th minutes brought the game level, and his final goal in the 92nd minute secured 3 points for United.

Immediately he stepped on the pitch,  Cavani became a problem for Southampton, and despite the Saint’s attempt to hang on to a point, Cavani showed no mercy as he connected to Rashford’s cross with his head, and sent it into the back of the net.

Cavani’s late winner not only saved United, but it also helped them record their eight consecutive top-flight victories away from Old Trafford for the first time.