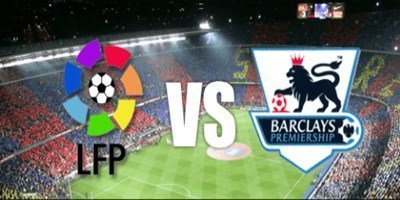 
Football Fans often engage in hot sessions debates about which league (Spanish La Liga and English Premier League) is the best. Here is our Verdict.


La Liga
The Spanish Premera Division also called La Liga Santender and Shortly La Liga is the Official Top flight League of the Spanish Federation, which plays with Twenty (20) Top flight Teams and uses the round-robin format, where teams play each other twice, home and away.


Barclay’s Premier League
Barclay’s English Premier League which is shortly called the premier League is also played with 20 Top Flight Teams each club plays against others twice (a double round-robin format), once at their home stadium and once at their opponent Stadium, the League also Plays 38 games. Teams receive three points for a single win and one point for a draw. No points are awarded for a complete loss. Teams are ranked by total points, then goal difference, and then goals scored. If still equal, teams are deemed to occupy the same position. If it’s for a championship, for relegation, or for qualification to other competitions, a play-off match at a neutral venue decides rank.
Article Continues Below

STATS
The two leagues have different styles of play, the Spanish League having standard attacking approach while their English counterpart depends on a rocky defense approach.


As we earlier said the English Premier League has seen more contest than La Liga, having about 10 top contestants each year which is one of the reasons they switched to using a Rocky defense  unlike La Liga which have just five (5) top contestants and two of which can be ignored Globally.


The Leicester City’s Drama is something which cannot be even Imagined to happen in the Spanish league since there is no top contestants in the league apart from their Giants clubs like; Real Madrid, Barcelona and Athletico dè Madrid, having little contest means there is a low chance for the second tiers to triumph since the top contestants are unlikely to lose up to Five (5) matches in the league.


But that should not make you consider the English League to be as tough as you think as only Real Madrid has won more Champions League (13) than the entire Barclay’s Premier League teams (12) though the English League have registered more winners; “Liverpool leading with five (5), Manchester United three (3), Nottingham Forest two (2) which came from two consecutive wins in a row, Aston Villa one (1) and Chelsea one (1).


It’s really crazy as just a single Club have more International honours than a whole league like the premier league but that is the blunt truth, The Spanish Giant (Real Madrid) won the Champions League last season making it their third consecutive win, something that have never happened before in the UEFA Champions League era and also overtake the Whole English League clubs (combined) after staying level on twelve for just a year.


Are you a Tech Lover? This Mind Blowing Technology Jokes will sweep you off your feets😂


The English League can also boast of having five (5) different clubs that lift the Champions League trophy while the Spanish Federation has just two clubs, though the two are trailing them behind by a huge 6 victories.


La Liga has won the European Competitions more than any other league, getting a total number of sixty (60) victories.


STATISTICS OF BOTH LEAGUES IN INTERNATIONAL COMPETITIONS


OUR VERDICT
The premier league might be so tough but according to statistics and head to head’s between the two leagues you can’t just decide they are ahead of their rival league La Liga.


The premier league defensive approach might be good to stop each other in the EPL but can’t make much impact on international duties as other leagues make sure they are a masterpiece in attack.

Four of the premier leagues clubs have made it to the last eight in the Champions League this year, Let see how they turn things around.