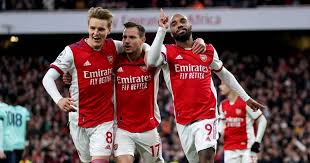 Arsenal continues their uphill top-4 war with another victory, as they defeated Leicester City to move back to 4th place.

Arsenal’s flawless victory at the Emirates rubberstamps their commitment to re-entering the UEFA Champions League.

Despite Manchester United’s win over Tottenham on Saturday, the Gunners are a point above them in 4th place.

Thomas Partey opened the goal count in the 11th minute when he connected with Martinelli’s cross and headed it in.

Lacazette doubled the lead for Arsenal when he scored a penalty, after Leicester defender Caglar Soyuncu handled the ball.

While Leicester put up an impressive fight, there was unfortunately no way back for them as the Gunners effectively thwarted all their attempts at Goal.

With their loss to the Arsenal, Brendan Rodgers’s and his team remain 12th on the EPL table.