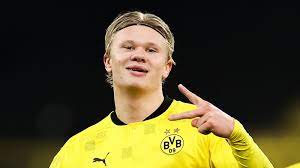 Erling Braut Haaland must be feeling quite special, as three football giants-Manchester City, Real Madrid and Barcelona- are currently holding their breath while the youngster makes up his mind.

According to Guillem Balague who made this report, “None of the three clubs know what is going to happen,”

Borussia Dortmund currently has a contract with Haaland until 2024, but the striker’s contract has a release clause that allows him leave for £63.2m this summer.

Balague, a European football expert with BBC Sport’s, says thw clubs made similar offers because they don’t want “it to be about money”.

“The clubs presented their projects, how they are going to play, how they will use him and everybody who is anybody in those clubs has been part of those discussions, including managers and directors.

“Staying put at Dortmund is still a possibility and if he does that it means he will stay for another year and then go to Madrid or Barcelona, because ultimately he wants to go to La Liga.

Who Has The Best Chance?

“Real Madrid are his number one choice, but City are playing on the fact that at Madrid there is Kylian Mbappe almost certainly arriving in the summer and Karim Benzema is still doing well as their main striker. And they are pointing out that Barca aren’t in a position to challenge for all the titles at the moment.

“The timing and circumstances actually play in favor of City a bit.The way City approached it was also to say ‘you’re very young, have a few years here and then you can have Real Madrid in the future’.

“There was a question put from the the Haaland camp to Manchester City, ‘What about Pep Guardiola’s future?’ And the answer that came back was that he will think about staying longer – his contract runs out in 2023. City are hoping to convince him to stay another year at least.”

At the moment, Haaland has scored 23 goals in 22 games for Dortmund this season, and has been superb for the German club since joining from Red Bull Salzburg in January 2020.

Liverpool Too Close For City’s Comfort After Win Against Arsenal.

“We Will Fight Till The End” Says Xavi AFter Barcelona Overwhelm Madrid.