Gordon Strachan on Manchester United Managers “I Thought it needed more to rectify than Man-management”. 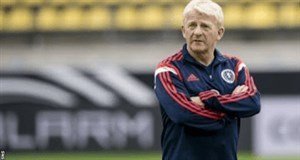 Gordon Strachan who played for Manchester United in 1984-1989, joined the Club for a huge spending of  £500, 000 due to a pre-contract agreement with Bundesliga side FC Koln, United paid a whooping £75, 000 as a compensation to resolve the row, he went ahead to score four (4) goals in his opening Campaign at Old Trafford, though United end Fourth in the league table, they were victorious in the FA Cup Final and Strachan’s brilliant performances earn United a 1-0 win over Everton at Wembley.


The player was sidelined with an injury in the 1985-1986 Campaign, and lost his form when Alex Ferguson Ferguson replaced Atkinson in the 1986 Campaign, the player even mocked the Scottish Manager’s sobbing as he told teammates “I never thought he did follow me this far South”.


He gives his verdict on the managerial roles of Manchester United, stating that current Manchester United Manager Ole Gunnar solskjaer is showing his predecessor that different procedures can deliver results.


He says Jose Mourinho was lacking in some areas and needed to ‘re-evaluate what he was up to at the Club, he also praised the current red’s manager Solskjaer for impressing everyone despite not being ‘World’s greatest Coach’. Jose won three premier leagues and two Champions league but his inability to create a good relationship with his professional players leads to his breakdown at the club.
Article Continues Below

The Scottish Manager admitted that he was surprised with the way the Norwegian fared at Old Trafford since becoming their interim Manager, He told Daily Post “We all agree that, over the last 15 years, Mourinho has been one of the best tacticians in football and I thought it would be hard for Ole to replace someone like Jose and he has got it. I did not believe any manager could, actually. I didn’t think the kind of negativity coming from Jose could get to a group of players the way it did.


I thought it needed more to rectify than man-management. ‘I don’t know Ole that well but I couldn’t see him and his group being as good as Mourinho tactically.


So what he has brought in shows you there is more to football. For all the seminars you get in sport Psychology, all the systems, all the players have to drink x-amount of water, they have to be sleeping by such a time, they need two grams of rice – and the rest of it basically comes down to man-management.


It just reaffirms that good people can change football clubs with drive. The attitude of the players has just changed completely, which is why Mourinho has to go away now and re – evaluate what he was up to at Manchester United.


He could take few lessons from Solskjaer who has pushed United back into top four contention and through to the quarter finals of the Uefa Champions League despite boasting limited experience.


He also says “I heard Ole isn’t the world’s greatest coach but Sir Alex Ferguson wasn’t the world’s greatest coach. He knew how to coach but for 25 years he didn’t do much coaching – he left that to others. He brought presence, discipline and footballing philosophy, things like passing the ball forward more and that’s where modern football is at.


It’s simpler than people are making out. You will get caught up in it if you believe all these stats, but it’s the Emperor’s new clothes, we know Ole is talking to Sir Alex and that’s good. He won’t be asking about tactics, he will be asking how he deals with being United manager on and off the park.


When Alex first went to United, he had a similar set-up with Sir Matt Busy. Nothing technical, just how to deal with being the manager at that club.


“As a top manager, sometimes you can think you’re getting all the problems in the world and that it’s horrible. So it’s nice to sit and have a cup of tea with somebody who has been there, done that and survived – he’s okay, he’s not nuts. It’s just nice to talk to somebody who has been in your shoes and there are not many who have walked the road Ole is right now.


Sir Alex may say ‘I had that with David Beckham or Jaap Stam, this is how I solved it – try that. There is nothing wrong with getting help because if we’re saying players need psychologies, why can’t a manager get help? Your family doesn’t understand it, the coaches around you don’t really understand it. You need somebody who really knows what it’s all about.”


Jose Mourinho himself has already confesses he lacks control over his players because of poor relationship with the ones that didn’t like him and he will correct that if he is appointed as a manager.

Liverpool’s Joe Gomez Out Indefinitely Due To Knee…