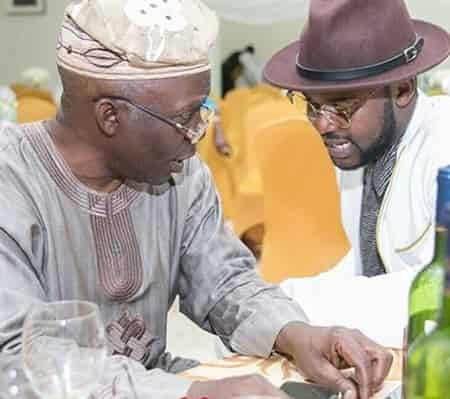 Femi Felana can’t hide his feelings on his Son’s recent outburst character, the Talk crooner has changed his music style to critics based over the years and he is showing no signs of giving up.


The Bahd Guy Falz is not just a musician but also a lawyer, the Nigerian comic rapper has studied law in England but instead join the music industry opposite to his mother’s advice.

Funmi Fela wanted her son to join their family league of lawyers but the young Folarin see’s something better than his father and mother’s profession as he chooses to join the entertainment industry.


Recently, His Dad Femi Felana who is a high profile lawyer in Nigeria and his wife, Funmi organized a get-together for friends, relatives and associates to celebrate the achievements that their son, Folarin popularly known as Falz has recorded within a short period in the entertainment industry.At the event which was held at Protea Hotel, Lagos, Funmi, who is equally a lawyer, went down memory lane and narrated how she felt bad about her son’s plan to dump law for entertainment.

“I am the disciplinarian in the house,” she said. “He (Falz) had started his career when he was in law school. I would tell him ‘you must practice law. I insist that you practice law. I sent you to England to study law. You cannot waste my money’. But his father would go behind me to encourage him. I told the father ‘Iwo lo nba awon omo yi je’ (you are the one spoiling these children).”
But vividly excited because of the way Falz’ career has turned out, she ended her speech thus: “We give God the glory”.
In his remarks, Femi Falana said the reason why he refused to influence his son’s choice of career was because of his liberal disposition.
“I want to corroborate what my wife said that I stubbornly conspired with Folarin to pursue music. We had a lot of quarrels in bringing up the kids. My wife believes that you spare the rod and spoil the child, which is good for the home. I am almost the opposite, not spare the rod, but also encourage the child. Sometimes, I accused her of child abuse because of her harassment of the kids.

“To be honest, we didn’t influence Folarin to read law. I took him to school one day. I think he was in primary five. He was late to class and everybody said ‘the Law’. I asked him later whether he wanted to read law and he said ‘yes’. He went to the law school, and he did well. We thought he was going to come out as a very good lawyer. He just came to meet me one day and said, ‘Dad, I think I want to move on. I can’t be going to court for adjournments all the time’.

“The mum came to challenge me that I was spoiling him. Apart from my own liberal disposition, I think I was largely influenced by my experience with Fela who was our client for about 15 years. Fela’s mother believed that he was going to be a colossal failure. How can anybody in 1967, in this part of the world, say he wanted to be a musician? Fela’s elder brother had become a doctor, and the younger brother was going to read law. But later, the mother became Fela’s mother and the brothers became Fela’s brothers.

“I remember an incident when Falz went for an interview on television and said his name was Folarin Falz. When he came back home, the mother asked why was he not bearing Falana so that the name could open doors for him?

“But he said, ‘I don’t want my father’s name to open doors for me. I want to open my own doors because if I had said I was Folarin Falana, I would have thought that the interview (opportunity) was granted me because of my father’s name. Even right now, I don’t want anybody to call me Falana’s son. I want people to be asking both of you, are you Falz’ father and mother?’”

With excitement, Falana said that that had happened, as he mentioned an encounter he had with some young people in Abuja recently. Hear him: “I was at Abuja airport, some young people came to me and asked, ‘sir, are you Falz’ father?’ and I said, ‘I think so’. They said ‘we know you are’. I replied, ‘if you know, that is alright’”

However, he added that he was surprised that Falz could be doing what he was doing now because he was reclusive and the most shy among his children.

“Folarin was the most shy out of the three of them. We are pleasantly surprised that he has become so wild. Sometimes, I listen to him and can’t believe that the quiet boy who sometimes will lock himself up in the room for about three days, has turned out like this,” he concluded.