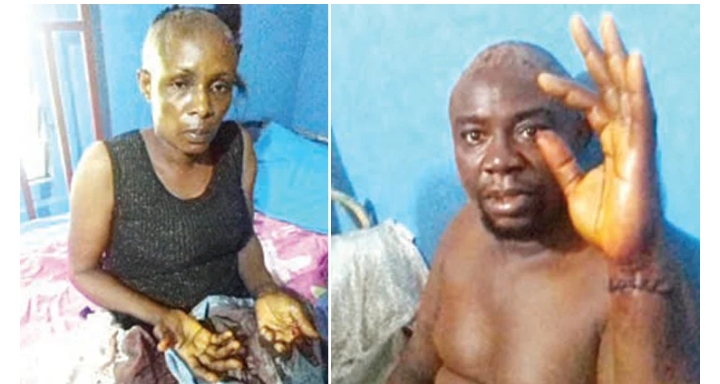 Female tenant, Comfort Nwagadi, and her husband are now hospitalized after they were attacked with a machete by their landlord, identified as Alabo.

The incident occurred on Ekwulobia Street, Mile 3 axis of Diobu, Port Harcourt, Rivers State. According to Comfort Nwagadi, the landlord had began acting hostile towards them because she refused his sexual advances at her.

On the day of the incident she had washed some clothes and spread them outside, but the landlord removed the clothes and threw them on the ground.

She picked the clothes while he was insulting her and her husband. Telling her she was busy taking care of a jobless man. When her husband joined them, he told the landlord to stop making fun of them.

Later that day, when her husband returned, while going into their company unaware that the landlord was standing in the doorway with a machete.

The couple claim that the landlord ran away with his wife after a report was made to the police.

The state acting Police Public Relations Officer, Grace Iringe-Koko, confirmed the incident, adding that cops were on the trail of the landlord.