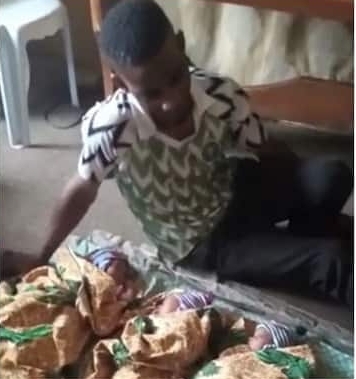 Kabir Owoyemi, a generator apprentice based in Ogun state, in an interview with legitng revealed that he wanted to run away after his wife gave birth to triplets.

The new father shared that when he and his wife had gone for a scan, they had only seen twins.

When his wife had the triplets through caesarian session, all was well with the family, until things went left and mother died a little while after the delivery.

Kabir got married to his wife in the year 2016 and they together have one other boy before the triplets were born to them. His profession as a generator apprentice is not enough to support his family.

After the death of his wife, Kabir wanted to run away. The burden of having to take care of four children all by himself initially terrified him.

It seems the journey might not be so tough for him as help has been coming to him in one way or the other.

Givers Supportive Foundation, a Nigerian NGO well-known for acts of great kindness, visited the family of Kabir Owoyemi and donated the sum of N1m to the triplets. The organisation got wind of the situation in the Owoyemi family through a Facebook tag and went ahead to offer help.

Kind hearted individuals have also been sending what they can to the family.