Man Who Was Paralyzed At Childhood Due To Incompetent Medical Personnel, Bags A Degree 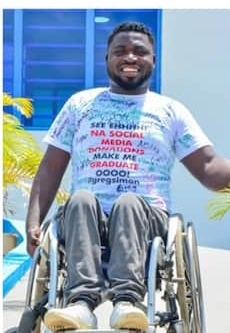 Greg Simon, a paralyzed young man, has in an interview with legitng shared his happiness and life’s journey.

Greg was born in zonkwa, Kaduna state, as a child with both his legs functional until a mild illness that confined him to wheelchair for the rest of his life.

One day, he fell sick and was taken to the hospital where he was attended to by medical personnel that later turned out to be incompetent.

With proper check up, he was given the wrong injection which caused his paralysis.

Unknown to them, the cause of his illness was actually polio but they didn’t know until he had become paralyzed and then life’s struggles began.

He lost his mum at the age of eight and his father abandoned him, saying he could not take care of a child without legs and had to depend on his older sister.

The mental, emotional and physical troubles got really bad for him and he trued suicide three times. He couldn’t socialize as a lot of parents kept their children away from him.

Things were tough for him but he chose to just live a good life after all he’d faced, with the help of his sister and donations from people, he was able to continue and finish his education.

Greg Simon now has a National Diploma which he bagged from Abubakar Tatari Ali Polytechnic Bauchi state. And now, the young relentless man, is a degree holder from the Lead City University, Ibadan.