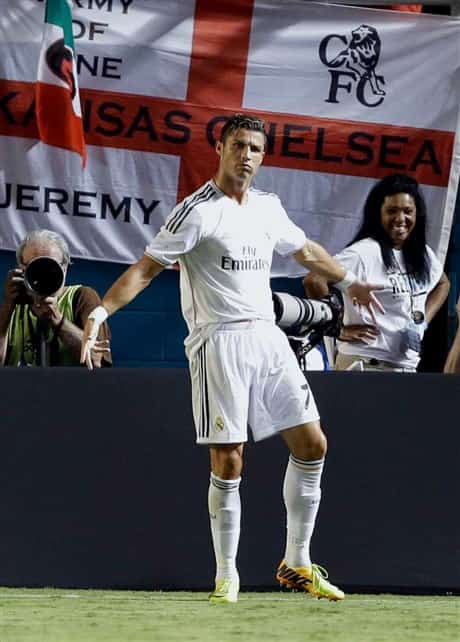 Cristiano Ronaldo has mentioned in an Interview with Youtube channel soccer.com that he first shouted Sii which means Yes when he scored against Chelsea in the International Champions Cup 2013 which he demonstrated with his nerve boosting celebration.

The Portuguese scored just a single goal against the London club in 15 matches during his spell at Manchester United, though the only goal was a vita opener in the 2008 UCL final, Frank Lampard went ahead to equalise it later in the match but John Terry spooned a ShootOut penalty way down the corner flag ⛳ and the Red Devils went out victorious.


Cristiano tell soccer.com that he didn’t know how it started but when he scored against the blues, he shouted sii and the other thing that happen was his celebration which the fans love.

The Portuguese in an interview with the Youtube Channel stated “Well, I was in the US and we played against Chelsea and I don’t know where it came from. I just scored and I went, ‘sii!'” he recalled.


“But it was natural, to be honest.


“After that, I started doing it and I feel like the fans, when they see me they’re like ‘sii’ and I was like, ‘wow, people remember Cristiano because of the sii,’ so I continued like that.”

Cristiano Ronaldo later in the match added another goal for Real Madrid to make it 3-1 and lift the International Champions Cup (ICC), also did something he was unable to do in his last 15 matches against the club.