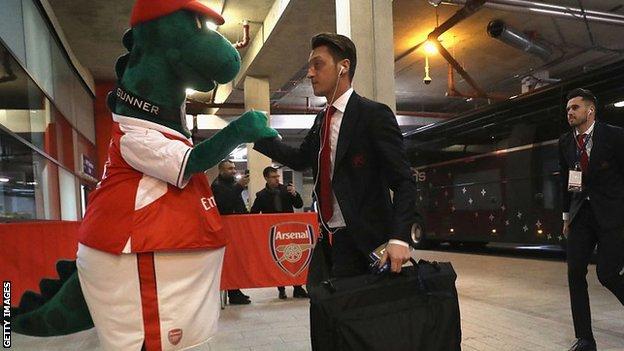 In a world where dinosaurs are about 99% extinct, their last surviving descendant who lives at the Emirates Stadium, is now endangered as Arsenal have decided to dismiss their iconic Dino Mascot known popularly and fondly as Gunnersaurus.

Arsenal recently announced that they would be letting go of their beloved Mascot after over 2 decades of service, as it is deemed an unnecessary expense while the club is currently going through financial setbacks due to the lockdown that has prevented ticket sales at stadiums.

The announcement was however met with lots of criticism and backlash from fans all over the world, and even spanish football club Sevilla claimed they had signed the Mascot.

Fortunately, Arsenal’s controversial, highest paid star Mesut Ozil, has offered to pay whatever amount is necessary to keep Gunnasaurus at the Emirates so long as he remains with the club.

Ozil made this pledge via his twitter account saying ” I was so sad that Jerry Quy aka our famous & loyal mascot @Gunnersaurus and integral part of our club was being made redundant after 27 years. As such, I’m offering to reimburse @Arsenal with the full salary of our big green guy as long as I will be an Arsenal player.”

It has not been announced if Ozil’s generous offer would be accepted as he is currently out of favour with the club’s management, but with fans demanding that the Mascot be brought back, the gunners just might accept the offer or better yet, squeeze funds out to pay for the mascot themselves.

“I Can Turn it Around” Says Expensive Number 2, Kepa.