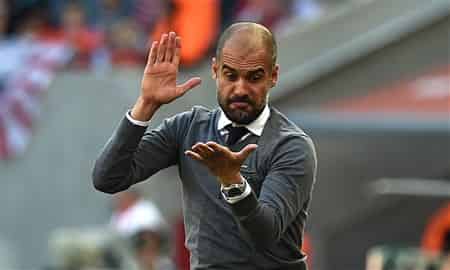 The City Boss revealed a shocking revelation on his talented mildfieder, Kelvin De Bruyne, while speaking in an Interview after Manchester City’s 8-0 thrashing of Watford.


The former Barcelona Manager revealed that one of his prominent mildfieder Kelvin De Bruyne possesses some character that are not appealing to him, such as the speed of his passes, the manager thinks the player pass too tough and is afraid to lose possession by this passing style of the 28 year old Belgian.


The talented mildfieder was left on the bench in City’s 3-2 loss at Norwich, though he came on the bench but failed to got the win.


De Bruyne skyrocketed a brilliantly goal late in the match against Watford to make the score 8 and he has a wonderful match as usual but his manager has something to confess about him the same night.


“He was quite good, yeah? The guy has a future, yeah?’ Guardiola joked after the game.

“Kevin is a special player, sometimes he sees something the other guys cannot see on the pitch.

“Sometimes I’m a little bit like “Grrr”, when it’s a simple ball and he loses it. How, with your quality, can you lose it?

“But he’s an incredibly talented player, with his vision up front and the quality he has.

“We had an incredible season, winning four titles, but we missed him a lot last season because he’s a special player.

“I’m happy he’s here, happy for the club. When nobody knew him or nobody talked about him, the club were there and said, “He can help us”.”