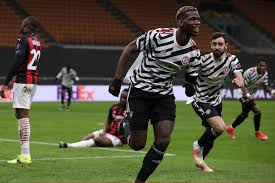 Manchester United’s forward Paul Pogba scored the winning goal for them, as they defeated AC Milan at San Siro to make it into the Europa League quarter-finals.

The French International, who has just returned from a thigh injury since February 6th, came on as a half-time substitute and then placed his team ahead with a well composed finish.

Ac Millan looked the better team before Pogba’s goal, and Rade Krunic, Alexis Saelemaekers and Theo Hernandez made some seriously threatening attempts against United, but unfortunately, none yielded a goal.

Zlatan “the god” Ibrahimovic was then summoned to try and rescue ACMillan from his former teammates, but his headed effort at goal was denied by United’s goalkeeper Dean Henderson, who was in fine form throughout the Europa League clash.

United would now join their Premier League rival Arsenal in the draw for the quarter and semi-finals on Friday.