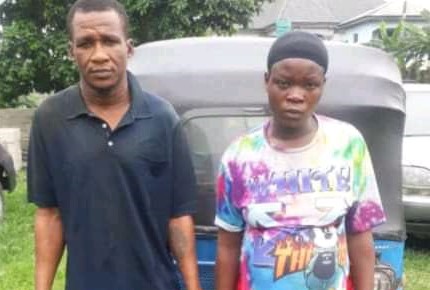 Adaugo Darlington and her partner, Steve Green, 38, were arrested in Rivers State for allegedly robbing unsuspecting drivers of their tricycles, commonly known as Keke Napep.

Adaugo is said to be skilled at pretending to be pregnant in order to gain sympathy.

According to the command’s spokesperson, DSP Grace Iringe-Koko, she poses with other gang members as passengers. They use knives and machetes are used to attack Keke drivers, then they process to push the drivers out of the tricycles while driving.

They ran out of luck on March 31, 2022 along Rumunduru when police operatives arrived at the site where their last victim, Lasisi Akreem, was robbed of his Keke.

The victim who who was attacked with a machete was able to describe his tricycle as well as the suspects. The officers pursued and caught two of the suspects and were able to recover the tricycle.
The victim was taken to the hospital for medical treatment, and efforts are currently on to apprehend two other gang members who have escaped capture and investigation into the matter has begun.