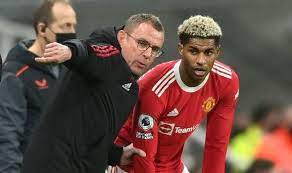 Rangnick said this after reports suggested that Rashford was considering leaving United again.

Reports say the youngster may be unhappy, after he was benched throughout the 4-1 loss to Manchester City despite Ronaldo and Cavani’s absence.

Rashford’s contract keeps him at United until June 2023.

However, it seems the youngster no longer wants to stay at United where he seems to be becoming an after-thought.

According to Rangnick, Rashford “didn’t say a thing about not being happy here.”

“He said to me that he’s still happy and that he wants to perform on a high level here for the club,” said Rangnick.

“Even in case he and his agents or his family think about going to another club, well he can do that but in the summer” added Rangnick.

“I like Marcus as a player,” said Rangnick. “I’ve had a few in the past at former clubs where they had problems at one stage but it’s our job to help him, to get the best Marcus Rashford that he can be.”