RONG ANSWER: A Student Answers Ronaldo Is A Goat In Exams And Fail By Just A Single Mark

A student took Cristiano Ronaldo’s G.O.A.T instead of the usual Animal (Goat) in Exams. 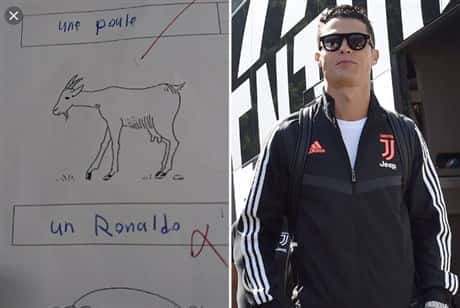 Ahmed Nabil, 15, choose Ronaldo as the Goat (Un Ronaldo), Cristiano Ronaldo is undoubtedly one of the greatest players of all time and his young fan Ahmed couldn’t resist the temptation to choose the Portuguese as the Goat even in his exams.


The Juventus Striker has won everything at club level and even put his Barcelona counterpart Lionel Messi in a limbo in terms of winning at different leagues.

The pair has endured their turf rivalry for more than a decade and has made names for themselves, winning the Ballon d’Or on Five (5) occasions each and having a decent number of trophies.


And just as everyone know Cristiano Ronaldo to be a G.O.A.T (Greatest Of All Time), that is the same way Ahmed Nabil know about the Portuguese and he went an extra mile to show his teacher that Ronaldo is a Goat even in the exams.

When Ahmed Nabil, 15, was presented with a variety of animals in his test, including a goat, the student instead wrote down ‘un Ronaldo’.

Although he was asked to include a sensible answer, Nabil couldn’t resist from naming the five-time Ballon d’Or winner.

When the young student was asked to explain why he did what he did, Nabil told SPORTbible: “It was a French exam I did two years ago.

“For me personally, it was a very hard test and one of the sections was: write the meaning of every animal we show you but it was in french.

“I couldn’t remember what a goat was called in french, so I thought I’d do something creative and make a couple of my mates laugh instead of just leaving it empty.”

The student later on posted the image of the test on twitter and got about 15,000 likes in just 24 hours.
SPONSORED LINK

He also included Mesut Ozil in one of the empty boxes provided by his teacher.

He added: “The other blank box was a mistake by the teacher, so I thought I’d continue my “football themed” answer and write Ozil.

“When the teacher finally gave me the exam she literally had no reaction. I don’t think she even knew who Ronaldo and Ozil was, so she didn’t tell me anything afterwards.”