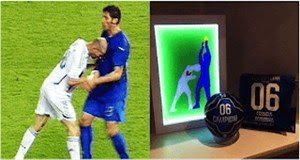 Here is the top Five (5) Football Most Craziest moments of all time all over the Globe.

Football is a very interesting game, having more than fifty percent of the world Sport fans, arguable the best game the planet ever had, with the football fans having so much passion, Love and Hate ‘Yes’ Hate. Fans always generate a high team spirit with their selected football clubs and develop a great passion that synchronises them with the clubs on a high frequency, the football club problems usually becomes their personal problems, even more fiercely.

Take a look at the game’s craziest incidents;


On 7 July 2006 World Cup Final in Berlin Zinedine Zidane Sent Italy Defender Materazzi Crushing to the turf in an extra time dying minutes. The France International claimed Materazzi insults him, but was handed a red card which in the end punish France with a penalty shootout defeat and the Italian’s went out victorious. The France talisman went ahead and quit football admitting he can’t take Sh*t anymore.

Materazzi on his side denied the claim of insulting the France international, but recently admits he says something to Zidane though it was not his fault. The center-half tell Gazzetta dello Sports he made a remark about Zinedine Zidane’s sister which provokes the Frenchman. The Italian admits he says to Zidane “I would prefer your sister” when the French skipper says he will give him his jersey after the final whistle.


He says “I did not cause it, I answered verbally with a provocation to defend myself. Yes I was tugging his shirt, but when he said to me scornfully ‘if you want my shirt so much I’ll give it to you afterwards’ is that not a provocation? I answered I’d prefer his sister. It’s true.


The Italian also admits it’s not a nice thing to say but
many players say worst, I didn’t even know he has a sister.


Both players were penalized,Zinedine Zidane receiving a three match ban why Materazzi received two, though the defender thinks the skipper was favored, he says

“I was the one head-butted and I got two match ban maybe I would have done three months or three years of Community services.

The two pair has not yet settled the scores clearly since then.


Luis Suarez sent Ghana home in the oddest fashion as he completely grabs the ball on the goal line with his hands which must have entered the back of the net had it been the Uruguayan have not become a false goalie.


A goal line handball was the only thing Uruguay needed to stop Dominic adiyiah from scoring the deciding goal, although the hand ball gives Luis Suarez a Red card and the Ghanaians were given a penalty, but Unluckily for them, Asamoah Gyan hand it over to the Uruguayan Goalkeeper and later in the night Ghana was sent out of the competition in the penalty shootout.


The Red card man becomes the Hero for his country and the worst enemy for the Africans, the incident was so crazy leaving both parties with jubilation and sorrows respectively.

The Ghanaians later on describe it as a cheating and biased game but Uruguay’s head coach confront the accusation and says it was no cheating and no bias, he said “Saying we cheated was too harsh, It could have been a mistake. Yes he stuck his hand out but it’s not cheating, I don’t think is fair to say that. The player was sent off and can’t even play the next match, what else do you want.
Article Continues Below

Is it Suarez fault for Gyan missing a penalty? we try to be dignified and if we lose a match we look for reasons for it, you should not look for third parties.”


This incident stirs a lot of accusation at that time and it is surely one of the craziest moments the game had.


In 2005 Newcastle United players forgot they were right in the ring and started throwing punches.

The incidents started when Newcastle player Bowyer start an argument with his teammate Kieron Dyer for not passing him the ball for a couple of times, this got him so angry that he started cursing his teammate which brings in a heavy fight.


The Incident was so unprofessional and it makes their manager and the entire management of the club angry.


The incident occur when they were a goal down and already with ten men, both players were also sent off for this bad conduct which left them with 8 men and a 0-3 defeat.


The two players however apologizes for this ugly incident, Bowler “I would just like to apologies to the fans, the chairman, the managing staff, all the players and everybody that is connected to Newcastle, my family and everybody that witnessed what happened today on the pitch. I am sincerely sorry.”

Dyer on his side also apologizes for his conduct “I will touch on the same as well. I would like to apologize to my teammates, the chairman, the manager and the fans and everyone connected with the club as well, we are teammates and we have disagreements, but we should not be fighting in front of 50,000 people. I am deeply sorry for it, especially because it is a crucial stage of the season.


Luis Suarez has made it again to my selection, that is crazy really, The Uruguayan has bitten not once but thrice in only four years, what will you call that? The Mad-dog I guess.

The first person Suarez bite was Otman Bakkal during a match between Ajax and PSV in 2010, he later on bite his second victim Branislav Ivanovic in the premier league three years after the first, he this time grabs the hand of the Chelsea defender bites it hard and drop it at once in a match featuring Liverpool and Chelsea.
Article continues Below


Also Read;Nollywood Teen Actress/Producer Regina Daniel’s surprises her mom with a Duplex stating “its a token of appreciation.”

As if that was not enough the


Uruguayan wait only a year this time to repeats his favorite hobby against Giorgio Chiellini in the match between Uruguay and Italy in 2014 World Cup Group D vital game.


Luis Suarez admits it is his personal problem but he is working with adequate professionals to solve it.


Though I really think we miss the arguments the Uruguay forward stirs up when he was in form with his Hobby (Biting).


5. THE 1986 “HAND OF GOD”
Come to think of it do you realize that the American players really knows how to bring controversy, Here again one of the most crazy football moment right back in 1986 World Cup an Argentine Hero takes to book an Infamous Goal which he called “The Hand of God”.

The Argentine Scores an INFAMOUS Hand of God goal against England in a quarter final match in 1986 and later on won the match with an incredible 5 men dribble goal, to send the Englishmen out of the competition.


The match will surely be remembered for more centuries as it was occurred by one of the greatest players the planet ever had ‘Diego Maradona‘ although only the Hero’s second goal was worthy of any praise, his first was an example of his ability to create controversy and divide opinions.


England were the losers in the end after finishing second in their group and had beaten Paraguay in the round of 16 to qualify for the quarter finals, while Argentina were on an unbeaten run that saw them eliminate Uruguay to enter the quarter finals.


The two countries had a recent controversial moment four years earlier at Falkland Islands, which makes the incident looks ugly for the English Country.


Argentina went on and won the 1986 FIFA world Cup thanks to the Maradona’s “HAND OF GOD.”


I hope you enjoy the craziest moments the game ever come across though there are controversial, but that doesn’t stop football fans to laugh about them and hope for more to come.


Drop Your Comments to let us know your favorite.
AND
PLEASE SHARE AMONG YOUR FRIENDS

Liverpool’s Joe Gomez Out Indefinitely Due To Knee…

Greg Clarke’s Resignation Would Not Improve…