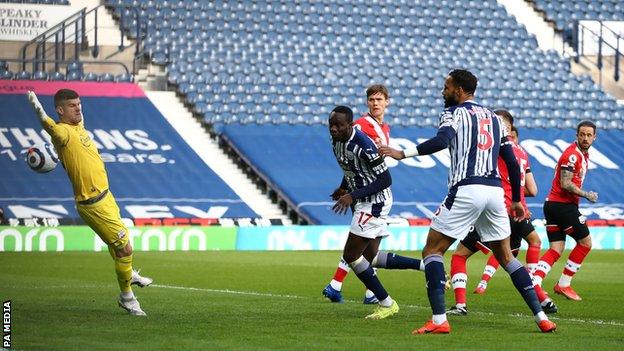 After inspiring a classical spat between Premier League managers Ole Gunnar and Jose Mourinho, the video assistant referee VAR, has once again created football drama as it failed to find a “definitive camera angle” to reverse an offside decision which eventually cost West Brom a goal in their match against Southampton.

West Brom’s Mbaye Diagne believed he had scored a goal for his side when he nearly sent Darnell Furlong’s shot into the net, but his celebration was ruined by a raised offside flag.

As usual, the match Officials consulted their computer colleague VAR, to review the offside decision, and Replays seemed to suggest that it was Kyle Bartley who was offside, not  Diagne.

However, this was not a conclusive decision as the image angles from VAR failed to clearly show whether or not Diagne offside, and so the on-field decision for offside was sustained.

As at the time of this event, the match was still level, and this decision robbed Sam Allardyce’s West-brom of their chance to take the lead. However, it was only a minor setback for the determined Baggies, who went on to defeat Southampton 3-0, courtesy of goals from Matheus Pereira, Matt Phillips and Callum Robinson.

Speaking in a post-match Interview, Allardyce said: “The big disappointment was the first goal that looked like a goal and should have been a goal, I’ve seen all the lines and angles and I think they got that wrong. Gladly for us it hasn’t had an impact on the result but it could have done.”

With their latest victory, West-brom is now 8 points behind the safe zone, and they have 7 games left to try and make it out of the relegation zone.