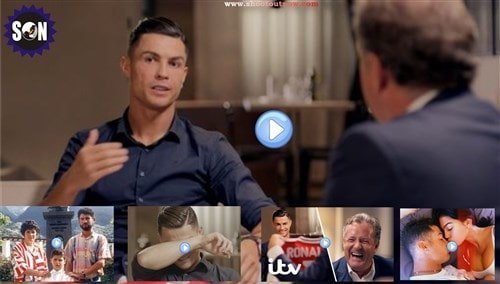 Cristiano Ronaldo has his most revealing interview with Piers Morgan, the Portuguese revealed his pleasure of taking Fiancee, Georgina under the sheets and even go for it when given an option to choose between his best ever goal.


He opens up on many things in his life, on and off the pitch and even went emotional as Piers took him back to the past by showing him a video of his late Father Dinis Aveiro, the Juventus talisman also revealed how close he was to Join London side, Arsenal, but the Gunners, in the end, failed just by a step according to the Portuguese star.

Piers Morgan boasts this is the most revealing Interview in Cristiano Ronaldo’s Career and it was conducted by no one else but the British Broadcaster, Piers  Morgan.

We have got all the top actions in the Interview that we think might really interest you, So!!!

Prepare to laugh, cry, turn, twist, shout and clap as you see this funny, emotional, motivational and encouraging Interview

#Ronaldo start the Interview about being a global star

“A part of it is fantastic: famous, the first page of the newspaper.

“After all this time, I want some privacy. In the last ten years, my privacy has gone.

“I haven’t been to the park with my kids. When you are in public, you cannot be yourself.

“It is too late to change.”

Morgan: “I think you are the best in the world.”


Ronaldo: Thank you very much.”


Morgan: “That matters to you?”


#Ronaldo on his strength


“I think my biggest strength is my mind. Talent is not enough anymore.


“I can wake up, play with kids but have to go to the gym for 30-40 minutes but that is the difference.


#How Much money in the Bank?

Ronaldo is asked about whether it’s right being worth half a billion dollars.

“I think so, I hope so. I think that might be too much,” he says, laughing.

#Ronaldo wants to give back to people who helped him

Ronaldo has now looked back at his childhood and the poverty that he used to live in.

He reveals that he used to scrounge for burgers on the island of Madeira, due to the hunger he had.

And now he wants to give back.

Aged 11 or 12, he recalled: “We were a little hungry. We have a McDonald’s next to the stadium, we knocked on the door and asked have you go any burgers.

“There was always Edna and two other girls. I never found them again.

“I asked people in Portugal, they closed the McDonalds, but if this interview can help find them, I would be so happy.

“I want to invite them to Turin or Lisbon to come to have dinner with me because I want to give something back.”

#Ronaldo on his son “Cristiano Jnr”

“This generation, they have everything easy.

“They have computers. They do not have to sacrifice to get what they want.

“I want him to suffer a little bit.

It’s maybe not a surprise.

Morgan says that the overhead kick against Juventus is his favorite Ronaldo goal ever… and the man himself agrees.

“I tried to score this goal for many, many years. I had scored 700-odd goals but I hadn’t done this. I thought ‘finally I had scored a bicycle, the beautiful jumping’.

“The way I had done against Buffon, against Juventus, in the Champions League. It was a beautiful goal.”

Morgan then asks if the goal is better than sex…

#Ronaldo on his relationship with Georgina Rodriguez

“Geo is, you know, it’s part of me. She helped me so much. Of course, I’m in love with her. She’s the mum of my kids, and I’m so a passion for her, you know. It’s great. She’s my friend. We have conversations, I open the heart for her, she opens the heart for me. Probably the…”

Morgan says: “The greatest love of your life.”

Ronaldo: “Exactly. This is what I want to say.”

It’s onto the emotional part of the interview – Ronaldo’s father.

Here is everything that was said after Cristiano Ronaldo was shown a video of his father talking about how proud he is of Ronaldo.

Morgan: “To hear your father speak about how proud he was of you must mean a lot to you.“

Ronaldo: “Yes, a lot. I think the interview would be funny, but I didn’t expect to cry. But I never saw these images. I don’t know where you … I have to have these images to show my family. But I really don’t know my father 100%. He was a drunk person. I never spoke with him, like a normal conversation. It was hard.”

Morgan: “What’s the sadness for you?”

Morgan: “He never saw how great you became.”

Morgan: “What you could see from that interview was how much it would have meant to him, I think, was very clear.”

Morgan: “He clearly had a huge pride.“

Ronaldo: “My family sees, my mum, my brothers, even my old son, but my father, he didn’t see anything, and it was — he died young.”


#Ronaldo on his recent rape allegation

“They play with your dignity. It’s hard,” he said.

“You have a girlfriend, you have a family. You have kids. When they play with your honesty, it’s bad, it’s hard.

“One day I was at home in the living room with my girlfriend and then the news they speak about Cristiano Ronaldo, this and that.

“You listen to your kids coming down the stairs and you change the channel because I was embarrassed. I feel embarrassed.

“It makes you feel so bad.”

“Oh of course, especially my mum, because the information that the media has, it is not the real information.

“Especially for my mum, she was sometimes very nervous. I said ‘mum relax, you know the son that you have at home, relax nothing is going to happen.’

“But she is nervous at games, so imagine when they talk about her son going to jail, rape.

“It is hard for an old person. But that the end of the day, it was good.”

#Ronaldo on relationship with Messi

Ronaldo spoke out about the relationship he has with Messi.

He also claims he is by far the best player that he has played against.

“Many people are surprised when I speak with him at UEFA events, but my relationship with him is we are not friends, but we share the stage for 15 years.


Ronaldo on how close he was to joining Arsenal

So, just how close was Ronaldo to joining Arsenal before Manchester United? Very is the answer.

Ronaldo is then handed an Arsenal shirt by Morgan.

“Ok Piers, I am so… I want to apologize… ok, forgive me for not joining Arsenal.”

“It didn’t happen, but Arsenal, I appreciate what they did for me, especially Arsene Wenger, but football you never know where you are going to play, life is like that.

“But I appreciate Arsenal because it is a fantastic club and you support Arsenal. And now you support Juventus.”


For the Full Video, You will need a postal code that is within the British aisle and then click HERE!

Thank you very much guys now there are only two things left, #First Comment Below #Second Share this among Friends to not only show appreciation to us but also make Ronaldo proud.

Tiwa Savage Looks Stunning In Swimsuit At A Concert In Milan, Italy [Photos]