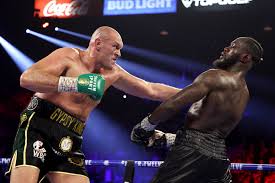 The highly anticipated Tyson Fury vs Deontay Wilder trilogy fight, has been called off as Wilder’s contract which gives him the right as a challenger is about to expire.

Fury was scheduled to face Wilder for the 3rd and final trilogy match on the 19th of December in Vegas but unfortunately his contractual right would expire before the scheduled date.

The cancellation of the Fury-Wilder fight, leaves room for Anthony Joshua to go head to head with the Gypsy King in a heavyweight unification battle.

It is now understood that Fury would instead be facing Anthony Joshua at Wembley sometime in 2021.

Anthony Joshua could either go ahead to face his mandatory challenger Pulev on the 12th of December, or Simply pay him a step-aside fee which would allow him to focus fully on Fury.

However, it is unlikely Kubrat Pukev would agree to step aside, as the 39 year old fancy’s his chances of making a surprising win over Joshua.

Watch And Download [Comedy] Broda Shaggi – What Is A She-Male?

Aubameyang Thanks Gunners For Love and Support After…