Woman With Four Children With Different Men says she’s been Abandoned, Cries Out For Help 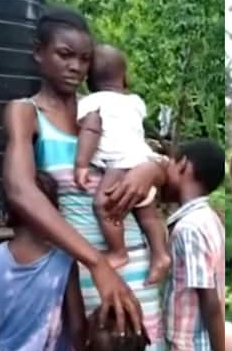 She said that once the fathers realized that she was pregnant, they would leave her to deal with the pregnancy herself and that’s how she ended up with four kids. Her four children are aged, eight, six, two, the last is six months.

kashara’s only means of income is the farm job she has in the community but the pay is really low and not enough to fend for her children. She’s also unable to buy data for her older children who are supposed to be studying online.

“The life I am giving them is the life I got when I was growing up, and that is not enough. I wish I could do more for my kids. I just can’t do all that I want. At the end of the day, I just have to be strong because the kids need me,” she said.

Woman’s Younger Lover Abandons Her, Runs Away With Her Daughter