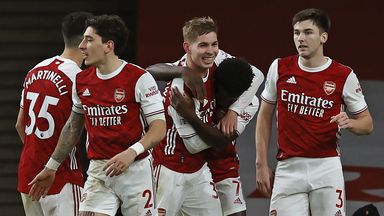 The English Premier League was stunned last night, when North London club Arsenal, made their South London rivals Chelsea look like a lower division club, as they recorded an emphatic 3-1 victory over the Blues.

Arsenal’s victory over Chelsea brings an end to their seven-game run without a win run in the Premier League, and would definitely help to ease the pressure on Mikel Arteta.

Two of Arsenal’s three goals cake in the first-half, the first came when Lacazette sent Chelsea’s goalkeeper Edouard Mendy the wrong way from the penalty spot, and 10 minutes later, Granit Xhaka who had just returned from his 3 game suspension (due to a red card), curled in a fine free-kick.

In the Second half of the match, the gunners maintained their momentum, and they scored another shocking goal early in the Second half, when Bukayo Saka’s cross unexpectedly dropped into the top corner of Chelsea’s goal-post, shocking both Mendy, and spectators as Arsenal sailed farther away from Chelsea.

Chelsea scored a consolatory goal late in the Second half when Tammy Abraham sent the ball in with his chest from close range. This goal from the blues seemed to change the tempo of the game in Chelsea’s favor for a while, and they later secured a late penalty in the match, but Jorginho’s poor strike was stopped by Bernd Leno.

Following their well deserved victory, the gunners now go up the league table to 14th position and if they maintain their winning ways, they just might be able to avoid returning to the relegation zone this season.

You can send support to the team.